News from the London conference 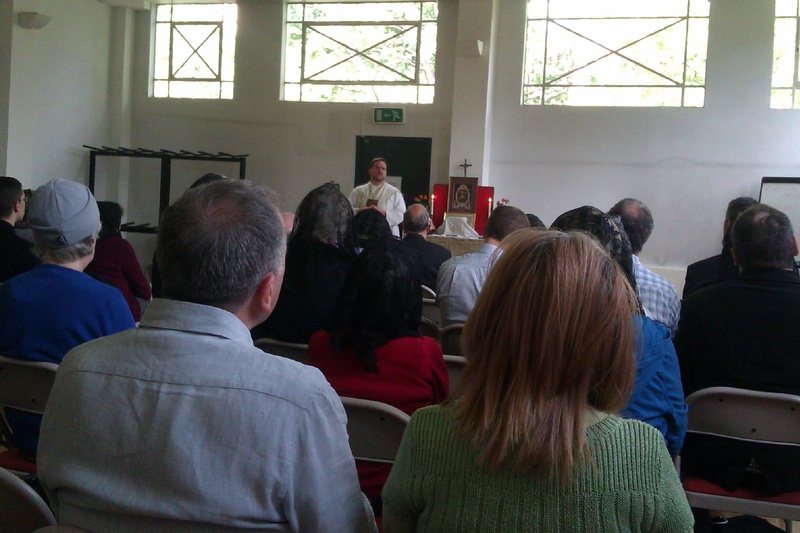 To those of you who were unable to come and who wish to know how things went, we apologise for the lack of updates and for delay in uploading recordings/videos. Our 'chief technician' is a very busy man, but he is working on it, and we'll hopefully have the recordings and videos available soon...

Here is a brief summary:

On Saturday, fifty or so people gathered for the opening Mass, celebrated by Fr. Hewko, numbers rising to around 70 by the end of the afternoon. On Sunday around 50 faithful attended, although some of them were different people from those who attended on Saturday. We estimate a good 100 or so people to have attended at some stage during the weekend. [We were interested to learn that Bishop Fellay's conference in Burghclere attracted not many more, one eyewitness telling us that only around 80 people sat through his three-hour-long talk, many of them appearing very unimpressed. We know that some of those 80 were people who agree with us and who don't agree with Bishop Fellay at all. And this number is despite the fact that Bishop Fellay was speaking in the numerically biggest and physically largest parish in the district; despite the fact that our District Superior has been urging everyone to attend, in sermons and on the District newsletter, for weeks; and despite the fact that Bishop Fellay had an almost-captive audience due to confirmations having taken place earlier on the same day.]

Missa Cantata on Sunday was followed by the renewal of the Consecration of the SSPX to the Immaculate Heart of Mary, first done by Abp.Lefebvre in 1984, and which Bishop Fellay will no longer renew.

Throughout the weekend, messsages of support sent to the organisers were read out. One from Dr. David Allen White, who sent his encouragement and prayers and regrets that he was unable to attend. Another from the Carmelites of Brilon Wald promising their prayers for the success of the conference and for the Resistance in our country. Another from Fr. Patrick Girouard, in which he announced that he had now set up a Resistance priory and chapel in Canada.

Everyone present was of one mind regarding the current crisis in the SSPX. An atmosphere of consolation and hope abounded, and several people have told us that it felt just like how they remembered feeling in their first days withthe SSPX, years ago. Many people have now decided that they can no longer in good conscience support or attend Bishop Fellay's new Society with its doctrinal aberrations and bullying, unpastoral bureaucracy. We will no longer remain under Bishop Fellay. One practical result of this is that a Resistance Mass Centre is now a permanent fixture in London.

Heartfelt thanks go to all those who kept us in their prayers, for the Fathers who took time to travel to visit us, and to the faithful in other parts of the world who, on our account, were without these excellent priests for one weekend.

Reply Carmelo
12:11 PM on June 3, 2013
In Minnesota, USA, the Resistance has a ninety-two year old handicapped woman that can't see in one eye and is blind in the other.

She sits in the front row of Mass and records the sermons.

Afterwards, she sends those sermons to our Chief Administrator at inthissignyoushallconquer.com.

There is almost no delay in uploading sermons to the Official Resistance channel, 469fitter and inthissign.

In Phoenix, Arizona, USA, we have a similar situation.

The one advantage in Phoenix is the man that records the sermon and provides the place for Mass is not Catholic, and hated with a passion by most Trad Catholics.

Despite this advantage, the sermons from Phoenix go onto the Resistance channels because those people know Faithful cry out from many parts of the world for these sermons and wait for them with baited breath.

It is mean-spirited to keep them waiting.

"A man that is not hungry has no cares"

That is translated from an old Mexican Proverb.

Giving importance to the souls of others is something Trad Catholics have lost sight of.

Reply THFJ
3:06 PM on June 3, 2013
Be patient! The conferences are well worth waiting for. This entire campaign, i.e. The Recusant and the conference have both been organised almost entirely by one man, who works full time in his spare time! There is no mean-spiritedness at the bottom of the delay.We should be thanking him and congratulating him!

Reply anonymous
1:24 AM on June 4, 2013
Thank you very much for the update, Ed. You know you have our support. The turnout is impressive and now Fr. Morgan has a lot more to think about. Our prayers are also for his awakening and courage to do the right thing. Fr. Paul Kramer has been doing a lot of research on this topic and I'm sure his talk was informative and inspirational. I hope the three priests had some private time together so they could do their priestly conversations. I'm sure they are in touch with each other, too. This is all good new. If this is happening in England, the rest of the world can have no doubts about its importance. FWIW Carmelo is the Amateur Exorcist. Great Britain is the tinder box of world ignition for the faith. Britain is a most important venue. I have seen some of the reactions of the Faithful and it is most edifying. I hope they will come in and register on this site so we can hear their voice all over the world, before it's too late for that.

Reply anonymous
1:38 AM on June 4, 2013
The whole wide world has a taste here of proper manners communicated through words. These are words the Menzingen-denizens would not be able to say - nor would they desire to say them! ----------- "An atmosphere of consolation and hope abounded, and several people have told us that it felt just like how they remembered feeling in their first days with the SSPX, years ago... Heartfelt thanks go to all those who kept us in their prayers, for the Fathers who took time to travel to visit us, and to the faithful in other parts of the world who, on our account, were without these excellent priests for one weekend."

You are doing all this for the preservation and encouragement for the Faith today, and yet have not forgotten to thank others who have sacrificed their priest for one Saturday and Sunday "on your account!" You see, world, what the Faith does to a Londoner!