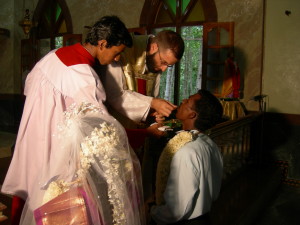 From the website Avec l'Immaculee we learn the following news from Fr. Chazal:

"Thanks to tactics of intimidation being used against the faithful who are being condemned to no longer having a Mass, Fr. Valan Rajkumar is now having to take control of all the missions around Chennai, the capital of Tamil Nadu.

Between the Mass centres of Saidapet (50), Bangalore, (another 50 to the north of the town, to our great surprise), Margao (50 also were at Mass there on Good Shepherd Sunday) and the village of RN Kandighai (300), Fr. Valan is now responsible for some 450 faithful, to which must be added all the others which are scattered through out this vast country. As an example, Roland Fernandez waits for us in Delhi, and some families  who are attached to the postition of Abp. Lefebvre have made themselves knownin the Persian Gulf. We should also add to that the rest of Tamil Nadu where we are being helped from now on by Fr. Pancras, an old friend of Bp. Williamson. He will visit Chennai every month to take care of the night vigils on the first Friday of the month, a real spiritual marathon. Fr. Xavier Ignatius has also received us with open arms, and asks us for help building a church for his 100 faithful of Tuticorin, and he is getting fed up with the official SSPX becuase during the 30 years of Society presence nothing has been done for this group which is one of the best in India. Fr. Selvaraj has agreed to look after our group in Coimbatore, to the west of Tamil Nadu.

We were very well received in Bombay and Vasai where a large number of the faithful understand very well what is going on at the moment within Tradition. The fact that we haven't been able to visit them during the last eleven months, since this crisis began last May, has not prevented them from keeping themselves informed and preparing to receive us. On the other hand, our reception in Palyamkottai left something to be desired, although that didn't come as a great suprise. If we add the missions in the Far East, more than 1000 faithful, 7 priests and  4 potential seminarians have escaped the grip of the liberals.

We can conclude that in less than a year, the beginings of the Resistance are looking promising in Asia. Coordination is perfect, with visits from outside being organised, financial support, publications (we're planning to print 2000 altar missals), and the emergence of an ad hoc hierarchy, which for the moment is informal. The excessive and liberal behaviour of certain priests over here, the expulsion of Bp. Williamson and the awful 15th April declaration (which remains unretracted as far as its substance is concerned) have allowed many eyes to be opened.