Via the French Resistance website "Reconquista" comes this story:

“We have just learned that the new [SSPX] prior of Fabregues has upped the ante with excommunications. The 83-year-old lady who was excommunicated (literally) by Fr. de la Motte for having welcomed Bishop Williamson into her home, Fr. Rousseau upped the ante by declaring that this excommunication would also stand were she to dare to welcome anyone at all connected with the Resistance to her home.

Apart from the odious denial of sacraments to an elderly person in need, there is the juridical absurdity of such a sanction. What does Fr. Rousseau mean by “welcome into her home”: if Fr. Pinaud stopped by for a cup of tea on the veranda, would she be excommunicated for that?

What does he mean by “resistance person”? Is there a black list of bishops, priests, brothers and laymen who are considered “people of the resistance”? Are Enoch and Eli on it?

Beyond this aberration and this and inhumanity on the part of an SSPX prior, we see a very dangerous spirit emerging, the spirit of a shop which no longer admits the possibility of any other way of eternal salvation than Bishop Fellay, the SSPX and its new spirit.

An SSPX priest who is currently in a very important post in the French district recognised that such a punishment was falling on the congregation.

Outside the Church no salvation! That’s a dogma, it’s absolutely true!

Outside Bishop Fellay and the SSPX no salvation – that is an obvious schism. Think about it.”

Post Script - We also learn via NonPossumus that Fr. de la Motte was replaced mid-year because he recently left the SSPX to go and join the local conciliar diocese. He is not the first. How many more, before Bishop Fellay saves them the trouble...?

What is the SSPX reaction to the departure of Frs. MacDonald and King?

From a reader comes the following:

'At St. Joseph's [in London] it was announced that: "Father King had walked out

on his parish responsibilities, leaving [Father Vandendale] to look after the whole

Given that Fr. King made sure to inform both Fr. Morgan and Bishop Fellay in advance of his intention to leave the SSPX, this is somewhat dishonest, to put it mildly. Notice also the lack of any hint of why Fr. King left - he just walked out, the implication being 'for no good reason.' This despite the declaration which Fr. King made public. As for "parish responsibilities", surely a responsibility towards the truth and towards the salvation of souls must rank highest amongst these, to say nothing of the fact that very many of his former parishioners are now (still) his current parishioners, having followed him out of the SSPX.

On a sadder note, I regret to announce the departure of Father Edward

MacDonald from the District just after Easter following his decision to

undertake an independent apostolate in Australia."

Once again, note what is not said, and what is implied thereby. Fr. MacDonald is currently, to use his own words, "with the Resistance in Australia." Why is there no mention of the Resistance by Fr. Morgan? Why is there no mention by Fr. Morgan of the crucial reason why Fr. MacDonald left? Why Fr. Morgan lead the ususpecting reader to believe that Fr. MacDonald simply left on a selfish whim, for no reason - is this not uncharitable as well as dishonest? Given that Fr. MacDonald decided specifically to go and help Fr. Chazal and Fr. Picot, and that (again, in his own words) he did so at the request of Fr. Ortiz, is it not extremely misleading to say that he left to undertake "an independent ministry" - as though Fr. MacDonald simply could not be bothered to put up with obedience and superiors any longer?

Why the lack of honesty and candour? What is there to hide? Ironically, by going to such great lengths to avoid mentioning the Resistance or the crisis in the SSPX, Fr. Morgan has only drawn everyone's attention to it still further. It shows that the actions of Fr. MacDonald and Fr. King have dealt a serious blow to the "everything's-alright" / "everything's-still-the-same" version of 'reality' subscribed to by those who are living in denial. More worryingly, however, is the adoption by the SSPX of the sort of "spin" beloved of corrupt political parties and secular media. Let your "yes" be "yes" and your "no" be "no".

Fr. King at the Liverpool Resistance, Sunday 10th May 2015 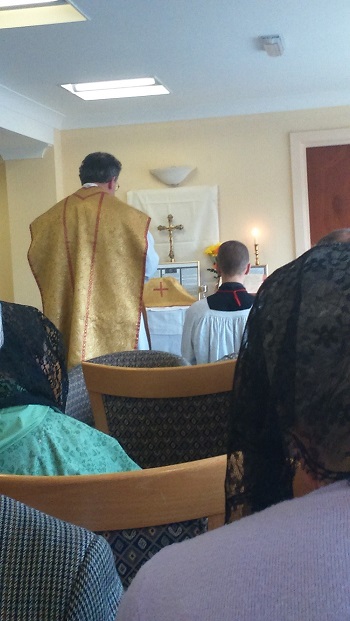 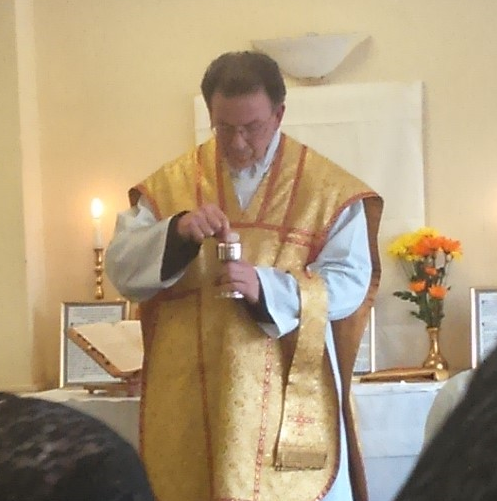 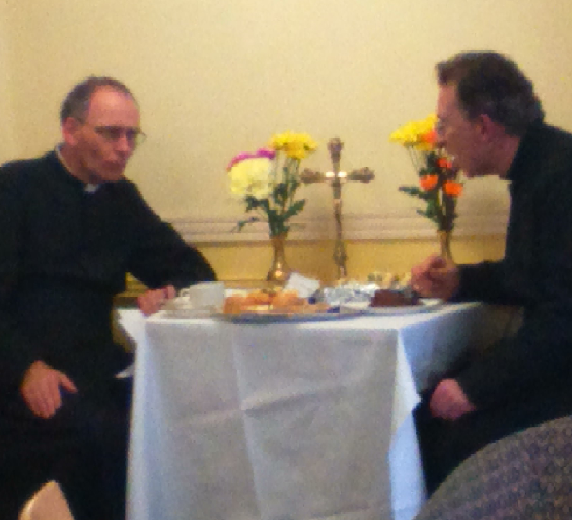 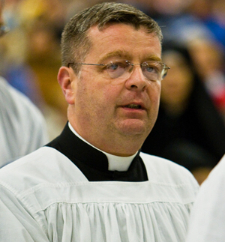 To readers living in England, Scotland and Wales, Fr. Brendan King will need no introduction. For the benefit of people from other parts of the world, he was ordained in 1987 by Archbishop Lefebvre and has been prior of Preston, covering the chapels of Northern England, until today when he announced his departure from the SSPX due to its new direction. His statement can be read here.

Deo Gratias. Please keep him in your prayers, and pray that more priests follow his example.

"SSPX Argentina - What Does it Mean?"

"The Society of Saint Pius X recognized in Argentina: what does it mean? Much more than you may think!"

We are grateful to our friends over at Non Possumus for drawing our attention to this very interesting piece of evidence concerning the recent recognition of the SSPX on the part of the conciliar church in Argentina. The article's source, the website "Rorate Caeli" will be known to many readers as being of 'indultish,' 'modernist-Rome-friendly' alignment, in a similar vein to the Fraternity of St. Peter and various other 'Ecclesia Dei' groups. If we promote this particular article, therefore, it is not because we share their sentiment, it is not because we are in agreement with them on the desirability of an SSPX-Rome agreement. Quite the contrary, it is because we are not in agreement with them that it is so interesting to note their conclusions.

Menzingen, in its DICI press release, wishes to downplay this event, to create the impression that the Argentine conciliar “recognition” is a matter of small or no importance. These people clearly think otherwise, as even the title of their article suggests ...and they are supporters of Menzingen’s new direction! We have been warning for some time about Menzingen’s very serious problems with honesty and telling the truth. Here is a “hostile witness” who agrees with us in doubting Menzingen’s candour and honesty, especially in their last paragraph. Has ‘Rorate Caeli,’ pillar of the indultish/Ecclesia Dei internet chattering class, gone all “reactionary,” “bitter” and “hate-filled” and ended up joining the Resistance? Or could it just be that The Recusant and others were telling the truth about Menzingen and DICI all along…?!?

See for yourself and make up your own mind.

Of your  charity, please pray for the repose of the soul of Fr. Nicholas Gruner, founder and director of the International Fatima Rosary Crusade, who died of a heart attack last night.

And Let Perpetual Light Shine Upon Him

May He Rest in Peace

Our friends over at Ecclesia Militans have uploaded some recent sermons from Fr. MacDonald at the Resistance in Australia (here). Keep praying that more priests do likewise.

Fr. Girouard on the Argentine Sellout

We draw the reader's attention to the latest update to Fr. Girouard's website Sacrificium.org, in the form of an article on the Argentine recognition "From Argentina With Love".

In his editorial he writes:

After a year of absence from the website, I am introducing my latest editorial, which deals with the recent administrative recognition of the Neo-SSPX by the government of Argentina, thanks to the help of the Conciliar Church.  ..."

...the rest of which may be read here.

After a hiatus, we are glad to see the return of his website and the influence of his intellect and experience which it brings with it.

And yes, in case anyone is wondering, "sellout" is the right expression, and no, it is not in any way an exaggeration. Consider that we are talking about the SSPX founded by Archbisho Lefebvre. To remind yourself of how the Archbishop thought of the conciliar church and how he viewed them, take a look at the letters and interviews by him on our Reference Materials page. Does this sound like anything less than a man at war with the conciliar church?

Next consider that the only reason why the Argentine state agreed to recognise the SSPX as part of the "Catholic Church" is that the conciliar authorities told them to do so. Without the urging of the conciliar cardinal, there would be no recognition. Consider that "Catholic Church" in the minds of such men as these means "conciliar church". In reality, therefore, the Argentine state has now officially recognised that the SSPX is part of the concilair church.

...And as for the SSPX, which is supposed to be at war with that same conciliar church - where is their reaction to being "recognised" as part of the thing they are meant to be at war with...?

Here is the only reaction we have seen so far, put out yesterday afternoon by DICI.

"Argentina: The State of Argentina Recognises the Society of St. Pius X Administratively"

Without delving into the body of the text (which is designed to downlplay the significance of this development and to distance themselves from its consequences and hide it implications), even the title is a piece of equivocation. The word "administratively" is almost superfluous. How else are they supposed to recognise them? But if the Argentine State Recognises the SSPX Administratively" the question begged is: "Recognises what about them?" (Answer - that they are part fo the conciliar church.)   What this does therefore admit, intentionally or otherwise, is that the Novus Ordo Archdiocese of Buenos Aires (Pope Francis's old See) and the SSPX are no longer "two different religions which are fighting it out to the death," but two different corners of the same big tent, two side altars in the Masonic Cathedral of Diversity.

SSPX laity, for God's sake wake up now, do something before it is too late!